When Paige discovered a magical dial, it allowed her to unlock her metamutant abilities by simply turning the letters on the dial to spell H-U-S-K. She was trained in the use of her powers by Niles Cable as a member of the X-Patrol.

Dial H.U.S.K.'s mutant powers allow her to painlessly shed her skin, turning into a new hero with both new superpowers and new personality. Some of the forms Dial H.U.S.K. has exhibited include: 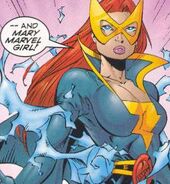